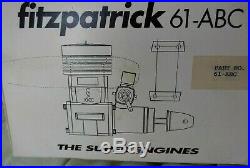 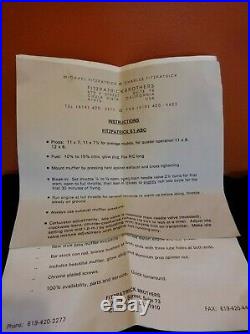 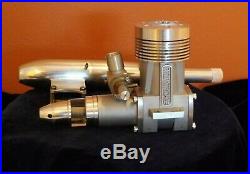 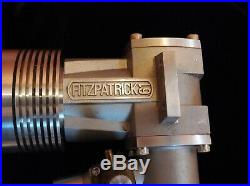 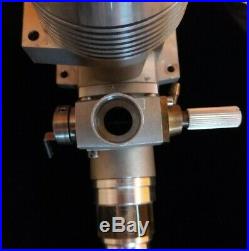 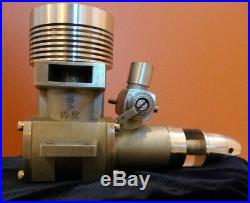 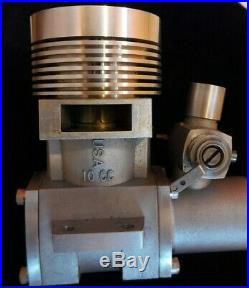 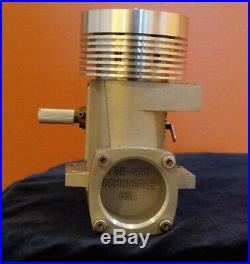 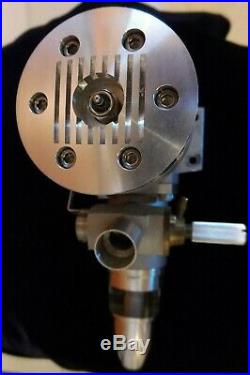 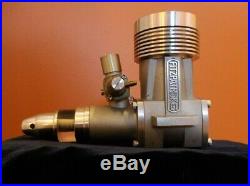 THE SUPER ENGINES FITZPATRICK 61 ABC 2 STROKE ENGINE WITH FACTORY TUNED PIPE. NEW AND UNUSED 1986 MODEL. This is a brand new in the box Fitzpatrick 61 ABC model airplane engine. This is a very rare engine. This is a true hard chrome plated brass liner, double ball bearing supported crankshaft and a heavy-duty connecting rod and TRUE Schnuerle Porting. This comes with the original box, all paperwork, the clear, acrylic prop display spacer, and THE FACTORY MADE TUNED PIPE. This engine was mounted but never run and a true collector or a fabulous find for the RC enthusiast! It is a new engine so it has great compression. Oiled and ready for whatever your pleasure may be, collector or wow your RC club! When these engines first came out Clarence Lee said they were the most powerful. 61 engine he had ever tested with the finest fit and workmanship of any mass produced engine he had ever seen. Folks, this is the best of the best. My husband has one on his Bridi Utter Chaos and it is amazing! 10cc of pure AMERICAN MADE POWER! This engine was originally designed for pattern flying, it has the best MID RANGE POWER MY HUSBAND HAS EVER SEEN! N page 79 of the August, 1978 Model Airplane News was the first ad for the NEW American Fitzpatrick 60 ABC Super Schnuerle model airplane engine which had the most macho advertising within memory! Described in the most glowing terms, “Rolls Royce”, “Super Schnuerle”, “Powerhouse”, “Brute Power”, etc. It blasted onto the market and within some 3-4 months had faded away. The brothers Charles and Michael Fitzpatrick, originally of Throgs Head, NY and now from California, known for their prowess in speed circles, had teamed up with a “Swiss Craftsman” in engine assembly and tuning to offer these beauties! The carburetor body as well as the exhaust and cylinder were cast in one piece, the cylinder head machined and polished, front and rear cover edges polished, a spinner nut attached, the long “elegant” silencer bolted on, the beautiful logo, “FITZPATRICK 60″ cast vertically on the bypass, and the “jewel-like” insides, all promised exceptional performance. And for whatever the reasons after some 100 of the assembled engines the relationships dissolved. Those fortunate enough to obtain one of these first production engines were treated to faultless casting, machining and polishing the likes of which had never been seen before in the model engine world. Some 8 years later, in the Sept. 1986 MAN an even more macho ad introducing two NEW American Fitzpatrick 61’s FSR-ABC Schnuerle’s by the brothers Fitzpatrick (their picture included) promised “out of sight vertical performance”, again “brute torque”, and “awesome” on and on about the engines, mufflers, and again noted they were “completely” manufactured in California, USA. There were 2 runs of the Fitzpatrick engine. THIS IS A 1986 FITZPATRICK 61. Only 300 were made. Review written by David R. No trades will be accepted, cash only. Address corrections will not be made. This is normal; please do not be concerned if this is the case with your package. Please, if ordering clothing make sure the clothing will fit you before ordering it. Mistakes do happen, and we will try our best to correct errors if possible. We are honest people and try to represent products accurately. The item “NIB FITZPATRICK 61 ABC 10cc 2 Stroke Nitro Engine Tuned Pipe Orig Box/Paperwork” is in sale since Wednesday, May 29, 2019. This item is in the category “Toys & Hobbies\Radio Control & Control Line\RC Model Vehicle Parts & Accs\Engine, Exhaust & Fuel Systems\Gas/Nitro Engines”. The seller is “tukiebird” and is located in Cadott, Wisconsin. This item can be shipped to North, South, or Latin America, all countries in Europe, Japan, Australia.